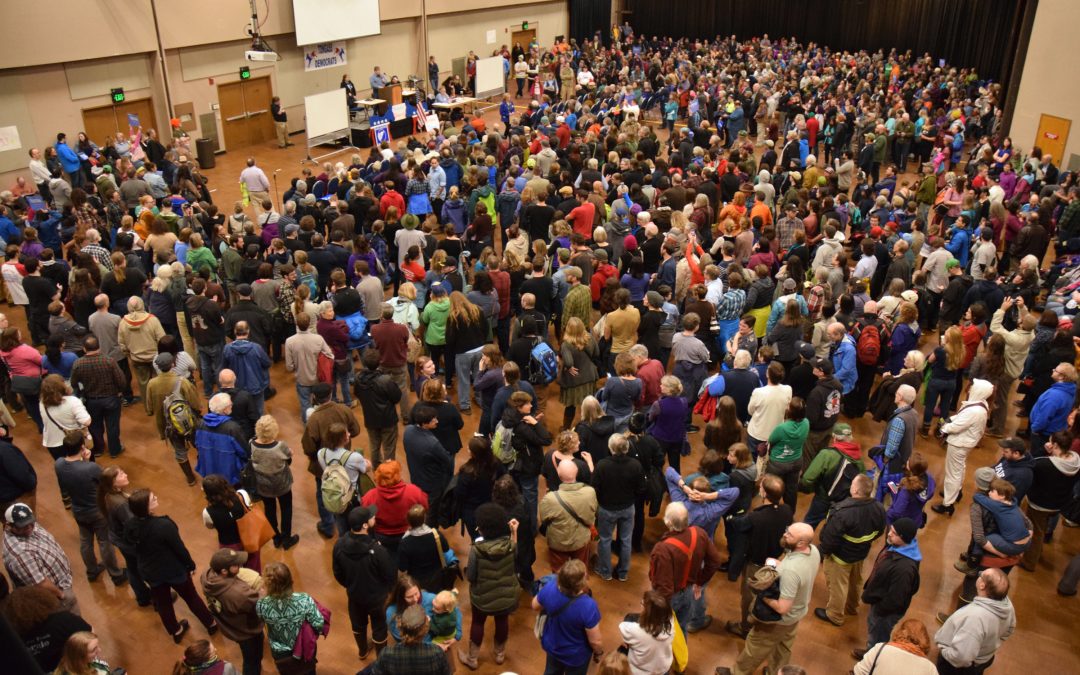 The Iowa Democratic Party botched reporting the state’s caucus voting results this past Monday, the first barometer for voter’s preference in the U.S. presidential election, all because leaders there failed to prototype the process with a smartphone app, according to widely circulated independent news reporting and a party leader’s declaration.

By various accounts, the app couldn’t be accessed by precinct chairs, and/or failed to transmit voter tallies from precincts around the Mid-Western state, leaving voting officials terribly embarrassed as the media and the public looked on incredulously. Here was the first U.S. presidential election for 2020, with Democrats biting their nails for a chance to beat incumbent Donald J. Trump by selecting a credible candidate to defeat him. Only to have the first polling data results crash, with political pundits and others scrambling to figure out who Iowa Democrats selected to be their 2020 candidate.

Behind her, stood MSNBC political analyst Steve Kornacki poised alongside a blank white electronic board in the New York City studio, ready to analyze the raw data as soon as it was transmitted from party headquarters.

Many news accounts report the failure was due to a smartphone app designed to support the work of polling officials, including to help tally and then e-transmitting voting tallies to party headquarters in Des Moines, in near real time. But when it came time to put the app to use, precinct chairs were unable to get it to work and were left resorting to past practices.

Yet the app was merely supporting technology for an entire voting system . The software manufacture, Shadow Inc., was arguably responsible for quality assurance. But it is the service designers’ domain to prototype process along with its supporting technology. In fact, prototyping a service is top of mind for most any skilled service designer, particularly when a service is to be exposed to the world’s scrutiny. Along these lines, I’m quite certain the Iowa caucus debacle could have been prevented had the Democratic Party called upon a service designer.

There is a lot of pressure on caucus night to both get tallies right and to report results quickly. In some far off polling sites, workers will race across the nation’s 26th largest state to hand-deliver a paper accounting to officials at Democratic Party headquarters, some driving more than three and a half hours — a straight shot across the state providing the night time roads are clear of snow.

Disseminating raw voter data quickly is critical in any election. This is in part because rumors and incorrect results — sometimes put out by an opponent for political gain — that will appear in a void of reliable data. For a caucus, voters show up to polling stations and spend hours lining up to demonstrate their preference for a candidate. Precinct workers count heads and submit the tallies to precinct chairs who are responsible for transmitting the data to a state polling central location, which in this election was in the state’s capital city, Des Moines. The state central location then sorts the data by precinct and the percentage of vote totals reporting, then releases those raw numbers to the media. The media, in turn, report the findings with their analysis to the general public.

With every election there is a rush by the media to be among the first to report results. At times in the past, competition has been so fierce that some news outlets have jumped out ahead of real voting results and made predictions based on what voters tell pollsters before they cast their vote. Releasing the real tally quickly helps prevent these kinds of false starts.

In the 2020 Iowa Caucus, officials said they opted not to share the app ahead of time due to fears of malicious hacking. Some or most precinct chairs were barely aware of the app, let alone devising a process and training to incorporate its functionality. 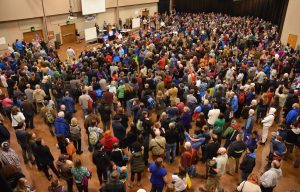 Voters fill Centennial Hall’s Sheffield Ballroom during the Juneau Democratic Caucus on Saturday, March 26, 2016 as Rep. Sam Kito III, D-Juneau, speaks from the podium as the chairman of the event. (James Brooks photo)

It remains unclear what role the app played, overall, based on stories about whether precincts were able to access it, tried loading data and that failed, or whether it was a coding error that prevented data transmission: or even if it was simply human error trying to figure out the app on the fly. Clearly there was more to it than just a software error, since a few days afterward, the Des Moines register reported discrepancies in the data. Plus, the national Democratic chairman, Tom Perez, intimated the situation was more complicated, calling on the national party to step in.

Service designers, whose responsibility is to design reliable, scaleable services around users’ needs, would hopefully know better than to introduce new processes with supporting technology without thorough testing — particularly for one of the most highly anticipated contests in the nation.

For reasons not at all well-known, Iowa has been chosen by Democrats to hold the first test of presidential candidates, despite that the state’s 90% white demographics don’t at all match the multi-cultural character of the country. It’s been said that because of it’s modest size, 300 by 200 miles, its central location and relative sparsity, 3.1 million residents (the 30th most populated state), that candidates can concentrate their precious resources while voters can get to know them. So Iowan’s opinions of the fresh candidates matter and most of the country is plugged in to hear how they vote.

In fact, the stakes could hardly have been higher. Some of the presidential candidates put their fortunes into winning the Iowa caucus, plowing millions of dollars, personal time knocking on doors, and hours to recruit and supervise volunteers, to win the first voting contest in the U.S. presidential election. Candidates who win or do particularly well in the contest demonstrate the viability of their campaign, attracting large and small donations that will serve to propel candidates across primary elections in the remaining forty-eight states. Presidential campaigns cost hundreds of millions of dollars. So, to have ignored prototyping is almost a crime.

A trained service designer would first seek to understand the challenge by capturing the party leaders’ requirements. We know, for instance, there was a requirement to total the numbers of voters in two sequential candidate clusters, called Alignment 1 followed by Alignment 2. This was new. In prior years, only final totals were reported along with number of state delegates awarded. This called for a new tally process. We have yet to learn how the app performed with data collection and recording, since the failure reported was with transmission.

In the Iowa caucus system, voters gather in gymnasiums, auditoriums, churches, community centers and halls — gathering in groups identified with a candidate. Each group must have 15% of the total registered voters present, or else they must disband and join another candidate group, a rotation known as the second alignment. Poll workers walk around counting the voters in each group and breaking some of them up. All the while, candidate representatives are cajoling voters to abandon their candidates to join another more viable groups. It can resemble a free for all, with each caucus running hours long. 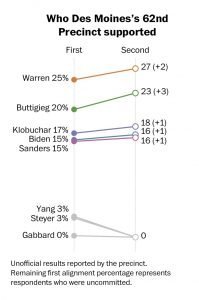 1st and 2nd alignment vote tallies at the 62nd precinct in Des Moines Iowa, the night of the caucus.

Poll workers have a process they follow for organizing the entire event, keeping track of time to know when to count the number of voters in each group, and when to disband them. The vote tally process can be tested by a High Fidelity prototyping technique to create a simulated exercise involving poll workers and groups of voters. With this technique, the service designer near replicates the environment to determine if the outcome matches stated requirements and whether the tally process is efficient.

For testing the smart phone app, a service designer could run poll workers through a variety of pre-determined scenarios to test capabilities and limits. A scenario, for instance, could throw up all sorts of obstacles and barriers to see if poll workers can overcome them with the app. In this test environment, the transmission error would have been discovered quite quickly.

After testing the process and the app separately, the two components need to be tested together as a system. There are several prototype Refinement techniques that would work for the requirements. One is to storyboard, or develop a narrative of the entire caucus event, then share it with others who are less familiar with a caucus, for their feedback and ideas. You would ask them if the system made sense and if they could suggest improvements.

Prototyping clearly takes planning and thought, and techniques such High Fidelity require near accurate replicas that can be time consuming and costly. But the Democrats had the time to prototype.

Security vs. Prototyping — Service Designers Can Figure Out The Right Trade-offs

We are left with some clues as to why they decided against testing, revolving around security and the fear of tampering. “My paramount concern is to make sure that these results are accurate,” Party chair Troy Price said a press conference. “We took the steps we felt were necessary.”

A computer science professor at the University of Iowa said it was an ill-advised trade-off to wait until caucus night to reveal the app. “The idea of security through obscurity is almost always a mistake,” Doug Jones, who was also a former precinct chair, told NPR. “Drawing the blinds on the process leaves us, in the public, in a position where we can’t even assess the competence of the people doing something on our behalf.”

More information on service design prototyping will appear in The Master: A Service Designer’s Handbook. Volume III, to be published by International Service Design Institute on February 25.