The state of Maryland, USA, is pretty progressive by most standards.  They were the first to offer its residents access to universal healthcare, to ban nuclear arms (and pushed to remove 1950’s era silos), and is also known in municipal circles for pioneering environmentally-friendly waste removal.  But when it came to distributing COVID vaccines, Maryland came off as inept at managing expectations, which service designers will recognize as a central tenant of service design.

The questions state officials are having to answer: 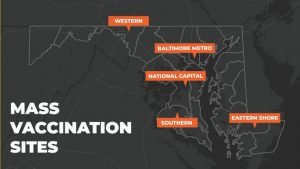 One would assume that Maryland, a forward-thinking state with highly educated residents, would have made sure their COVID information website would have been accessible by users of mobile internet devices, iPhones, and the like. What’s more, the state seems to have put its scheduling resources online for making vaccination appointments, only to discover its most vulnerable seniors, a priority group for vaccinations, either didn’t have computers or found the website too confusing.

“Lawmakers, county executives and public health experts say the state-run clinics, while efficient at inoculating people, have not served the people most at-risk of contracting severe disease,” reporter Hallie Miller writes on March 18th in the Baltimore Sun.

Geographical outline of the state of Maryland showing its population centers and the locations of its five vaccination centers (in pink).

In a March 8th interview aired on a local broadcast station, the Acting Health Secretary of Maryland, Dennis Schrader, said, “There’s still no timeline on when Maryland will move into Phase 2 of vaccinations.” “We’re looking over the horizon, especially when we get more vaccine probably in April, but we don’t want to get ahead of ourselves.”

The general population of Maryland will be vaccinated in Phase 3, he said, while the majority of state residents have waited nearly three months for their time to qualify.  All the while, the five vaccination sites are overwhelmed, with reports of wait times over two hours.  Schrader said part of the problem is people arriving too early. 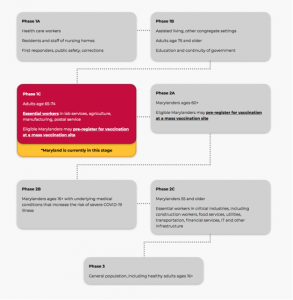 The state of Maryland’s phases of vaccination distribution to the state’s residents.

The planning for vaccine distribution is a government-provided public service, regardless of who administers the shot.  Sometimes public services are well designed, thoughtful, and include the involvement of a service designer and even the end-users.  The United Kingdom and Australia devote many of their resources to working with service designers, for instance.  Alas, the United States has a ways to go.

I have advised software application companies, recently streaming service Britbox among others, with ways to improve the service experience. I would have liked to have advised Maryland’s Health Services, purely for the need.

It’s uncertain whether these points of frustration with regards to Maryland’s vaccination program are due to ineptness, or political favoritism, or something else.  But because administrators have failed to properly communicate the challenges along with their rationale for decisions,  many residents are left to conclude that these state officials have no business in jobs with responsibilities for the health of millions.

Service designers have tools to plan for services, including touchpoints to provide a user with clear communications, so that the service experience is easy to access and reliable.  For state residents, they might consider voting out the new in exchange for turning back †o the avant-garde days.