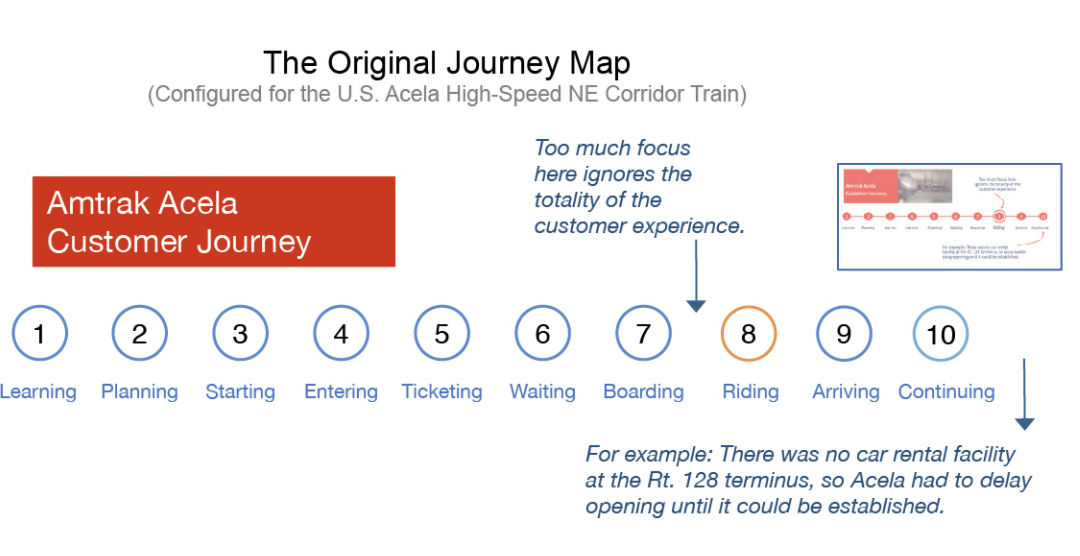 Journey Map Definition.  A diagnostic technique depicting a user’s interaction, in sequence, with a service experience.  A journey map is also associated with the meaning of a service journey and user experiences.

The story of a journey map is wrapped around the Acela, a U.S. high-speed train launched in 2000 that ferries nearly 3.5 million commuters a year at speeds up to 150 mph between Washington, D.C., New York City, and Boston.  The Acela is managed by Amtrak, America’s national railway system, which doesn’t earn a profit and requires annual subsidies from the government.  Due to the squeeze on funds, the system is outdated and needs regular track replacements, including along the Northeast corridor where Acela travels, where turns restrict speeds. In comparison, the Japanese Shinkansen, the world’s fastest train, reaches consistent speeds of up to 200 mph on special tracks.

Rail travel in the United States has a storied history. It played a significant role in settling the West, creating towns, communities, and farms in vast open areas,  It is also associated with the robber barons and labor exploitation.  But over time air travel replaced the railroads and the national rail system was threatened by poor ridership, which led to a long slow decline of the railroad until the federal government provided annual subsidies to maintain a national rail network to guarantee connections to remote areas of the country.

Given this, Amtrak officials saw the Acela as an opportunity to polish its tarnished reputation by configuring the Acela experience to meet commuter needs. They hired service design firms IDEO and C+CO.

The designers began by capturing passenger experiences. They stationed observers to map out their journeys on the railroad, looking at passenger decisions, actions, reactions, and behaviors. They also handed some passengers diaries to learn about their physical, logistical, and emotional experiences. When presented to Amtrak, the designers demonstrated how the service experience can be segmented into stages.  What’s more, the first stage occurred at the time a passenger thought of taking the train, and the experience lasted long after disembarking.   This final product map was dubbed a ‘journey map’ and shown to Amtrak officials for a shared understanding of passenger experiences.

Ultimately, the map was used by the designers and Amtrak to improve a rider’s experience with redesigned train platforms, new and better signage, and configurations for Acela seating and bathrooms.

Twenty years later, journey maps have become one of the most popular service design techniques.