The Surprising Story of a New York City Icon 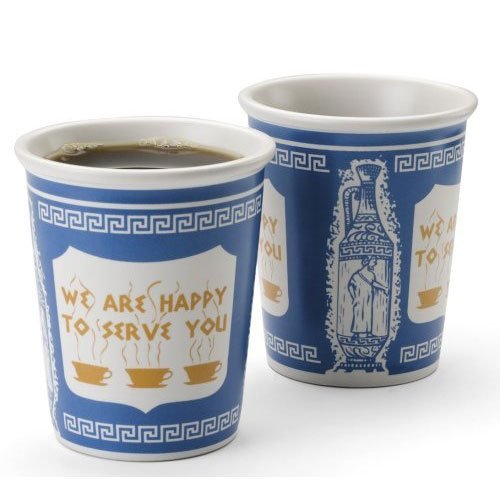 Laszlo Büch, a Holocaust survivor from the former Czechoslovakia, made his way to New York City after World War II. Within a dozen years he would take a struggling startup to icon status by reshaping the New York coffee cup to satisfy user needs. The epitome of Service Design.

Burk, a salesman for Sherri, came upon an idea to design a cup without a handle that could carry hot liquids; a product we now take for granted. Burk’s idea solved a need on behalf of the on-the-go coffee drinker.

Burk also wanted a design that would-be buyers, the diner owners, would find irresistible—a Greek-themed cup with a welcoming hospitality message. The finished product was a four-inch high cup with a blue solid background, white Greek meander top and bottom, and a white shield on opposite sides separated by two amphorae. Inside each shield are images of three cups of coffee with abundant trails of steam, and the words “We Are Happy to Serve You,” appearing to materialize in the piping hot steam. Yes, all that on a hand-held paper cup.

All through the 1990s the “Head,” as it became known, sold more than four billion cups a year, trailing off until it was no longer manufactured in 2010, the year Burk died at age 87. Over the years, the cup’s appeal has shifted from its functionality to its design, an iconic image representing New York City. Today the cup is a common theater, movie, and television prop to convey an earlier, grittier time. The Anthora cup was recently spilled in the recently released acclaimed Netflix show MindHunter, and George Clooney held on to one as Michael Clayton did in the eponymous movie also trending now on Netflix.

“It was for decades the most enduring piece of ephemera in New York City, and is still among the most recognizable,” New York Times reporter (Fox) wrote in Burk’s obituary.

It remains known as the Anthora cup because of Burk’s difficulty pronouncing “th” from his earlier years growing up in Europe before he spoke English. Burk served as Sherri’s chief marketer and salesman until retirement.

The Anthora vignette demonstrates the importance of recognizing the market. Burk discovered he needed to satisfy the end users, coffee drinkers, not his direct buyers, the Greek diner proprietors. His buyers may never have perceived the poor design of the cup, and thus were unable to satisfy their own customers. His contribution was widespread, helping coffee shop owners around New York City satisfy millions of customers with a positive experience.