U.S. carrier Spirit Airlines must rely on personas for its business model. How else could they be the least popular airline and also the most proﬁtable.

The ideal persona is apparently someone who could care less about the frills most of us take for granted such as onboard drinks, free or modest costs for luggage, and a boarding pass. Anyone who doesn’t fit their customer persona is likely to be dissatisfied with the service.  Spirit offers service designers a lesson that a sufficiently large group persona can support an entire business. 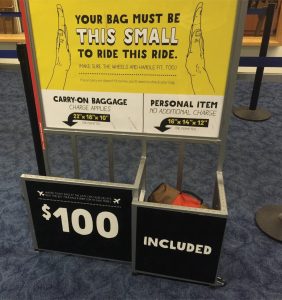 Jennifer Lawson, a 17-year-old, was returning from camp traveling on Spirit Airlines from Houston to the East Coast, a 2,000-mile, 3-hour journey taking her about halfway across the country. Prior to boarding, Jennifer forked over the rest of her cash at the ticket counter to cover the costs of a bag fee and $10 to print the boarding pass.

Then, during the flight, Ms. Lawson asked the flight attendant for water.  The stewardess put out her hand for of bottle of water costing $7, which would be no more than $3 on the ground. Ms. Lawson pleaded, telling the stewardess she spent the rest of her money at the ticket counter to get on the plane, to which the attendant responded, “There are no exceptions,” and walked away.

Ms. Lawson got out of her seat and followed the attendant up the aisle. “I don’t need a whole bottle,” she said, “just a few sips of water.”  The attendant marched up to the front of the plane and opened the bathroom door and pointed to the bathroom sink, above which was labeled “non-potable.”

Spirit’s ideal market seems quite satisfied enduring whatever it takes to get to their destination if it saves a few bucks.  Those who fall outside the desired persona, lured by low base fares, will likely be disappointed with the service.  A service designer’s aim is attempt satisfactory service experiences.

A Google search of “Spirit Airlines” brings up hits of many agitated travelers sharing their negative experiences.  One blogger, whose website defends the airline’s practices, wrote: “Spirit guarantees customers will arrive at their destination, even if it’s three days later.”

Nearly 12 of every 100,000 thousand Spirit Airline passengers file complaints with the U.S. government—seven times more than any other airline, according to the U.S. Department of Transportation in a 2016 report.

Still, by financial measures, Spirit Airlines is a winner in a competitive industry in which most airlines, if they even meet profitability, do so by the slimmest of margins.  Since Spirit’s public offering in 2008, their stock shares have doubled while the company continues to ride through stormy economic times.

One could likely deduce Spirit Airlines’ prized target persona is a head-of-household who works all year for a family vacation, and once the destination is decided, it matters little how the family gets transported as long as it’s quick and cheap.

Spirit Airlines is loosely modeled on Dublin, Ireland-based Ryan Air, which offers €40.00 ﬂights all over Europe.  The concept is nothing more than a ﬂying bus.   However, Ryan Air makes short hops to its major destinations, while Spirit airlines covers the length and breadth of the United States.  So, the absence of drinks and meals could well be a major discomfort.

The begs the question—how does Spirit achieve profitable balance statements while at the same time accumulating unprecedented dissatisfaction? Regardless of its detractors, the airline has mastered its persona and find there are plenty willingly to endure the service for the beneﬁt of low-cost ﬂying.